Why Your Next Fruit Bowl Might Be Picked By Robots

Just over a hundred years ago, in 1921, the word “robot” first appeared in human vernacular. Playwright Karel Čapek’s Rossum’s Universal Robots portrays a mad scientist who creates robots that are able to work in factories. Mirroring our understanding of robots today, the robots are seen as a way of adding efficiency to human labor. As the pioneering robot media production, the show of course ends with the robots storming the factory in a fiery revolution and destroying human civilization. Since that time, society’s fascination with robots has bordered on obsession. From friendly robots, like C-3PO and the Jetson’s automated maid, “Rosie”, to more controversial robots, like those in I, Robot or The Terminator, we simply can’t get enough.

The play was set far in the future, or at least at the time it was far in the future – the year 2000. And while multimedia continues to find new stories for our robotic friends, real robots have been slow to catch up to the hype.

What Can Robots Actually Do?

Reminiscent of Karel Čapek’s futuristic imagination, most of the successful examples of robotics in the real world have indeed been on factory floors.

Factory robots comprise the vast majority of commercial robots today and are focused on very repeatable, controlled, and precise movements. Most of these tasks are pre-programmed in the machinery. As a result, they are actually able to perform many tasks better than humans.

For example, car companies want all of their cars to be painted in exactly the same way. Robots make this possible. By contrast, humans will always have ever so slight variations in how we accomplish repeatable tasks. Even the blood pumping through our hands can affect our precision.

The previously mentioned labor issues plaguing the manufacturing industry are also applicable to other areas of the economy. As more people turn to knowledge work, many sectors of the economy are facing labor shortages. We are seeing robotic solutions ranging from autonomous semi-trucks to robotic servers in restaurants that bring you your meal. There are even robots that will be friends with your children or that will paint your nails.

However, bringing robots out of the factory and into unstructured environments requires the robots to learn how to embrace variable decision making. Advances in machine learning and computer vision are beginning to make this possible.

Can Robots Work on Farms?

advanced.farm is using robotics to help ensure a sustainable supply chain for one of the most important goods in our society: food. Currently, our robotic machines pick strawberries and apples. Most fresh fruits are still picked by hand, one at a time. With an ever growing population, we need solutions to help farmers meet growing demand. Unlike in a factory, a robot that picks strawberries or apples can’t have simple pre-programmed motions. Plants change everyday, and due to branches and other obstacles, each piece of fruit must be approached in a unique path in order to avoid damage. Additional nuance is introduced in the process of deciding which fruit is ripe, damaged, too big, too small, etc.

To solve these problems, our company originally bought off-the-shelf technology and retrofitted it. However, it quickly became apparent that existing hardware was not ideal for the unstructured environment of a farm. We have since custom developed our own stereo camera, robotic arms, and self-driving chassis to solve these problems (see our tech stack).

What Is The Future Of Agtech?

We have assembled a world-class team of engineers and are already making waves with what we have built. Our machines have been deployed throughout California and Washington and have picked millions of strawberries that have been sold into retail. advanced.farm employees train local farmworkers how to operate and maintain the machines. Reliability has improved to the point that farmers are utilizing the machines in the middle of the night. With only one person operating several machines, the farmer shows up at the beginning of the day, and thousands of berries have already been picked!

Now, we are taking what we built to pick strawberries and applying it to apples and other crops. Investors and farmers alike have taken note of our progress. Kubota, Yamaha, and other venture capitalists have invested $35M into our company, and 6 large farming companies are using our machines this year.

It has been over a century since the tractor first revolutionized farm fields. Now, farm yards are full of a variety of different kinds of tractors all built for different tasks. Similarly, advanced.farm believes in a future in which farmers have many different robots for many different tasks. Not only do we believe in this future, we are building the platform to make it possible. We invite you to continue reading our blog posts to learn more about our work to build the future of agriculture technology! If you would like to speak to our team about solutions for your farm, please contact us.

Will Automation Save American Farms? Or Destroy Them?

Why Your Next Fruit Bowl Might Be Picked By Robots Stay up to speed with all the latest from advanced.farm

Want to see our tech in action?

Thank you for reaching out. We look
forward to connecting with you. 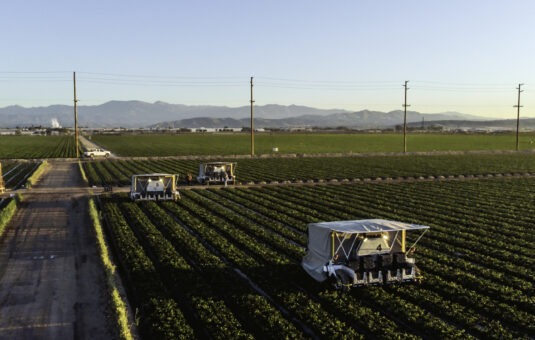 Please fill out the form and we’ll be in touch.

Please fill out the form to receive our newsletter.

Thank you for your interest. We look
forward to showing off our tech.

Thanks for signing up!
Check your inbox - you'll hear more from us soon.

We hope you enjoy our newsletter
that has our news and insights.

We build robots for the next frontier in farming. Join Our Newsletter
Back

We build robots for the next frontier in farming. See videos of our technology in action. Schedule a demo. Download a brochure.